Today’s post is one for fans of all things sparkly – I decided it was high time I show off some of the jewellery I’ve bought in charity shops. I’ve mostly bought beaded necklaces, because I think they’re classic and don’t really go out of fashion in the same way that metal pieces do. Sure, there will be seasons and sometimes years when beads are out of style, but they come back quickly. And if, like me, you don’t give a crap about trends, you can wear them all the time anyway!

When you’re buying beads second-hand there’s really only one thing to worry about – how the piece is constructed. If the item is a straightforward string of beads, like the necklaces in the photo below, and the thread is fraying and sticking out between the beads, or if feels weak, or overly stretchy, you can easily restring it. 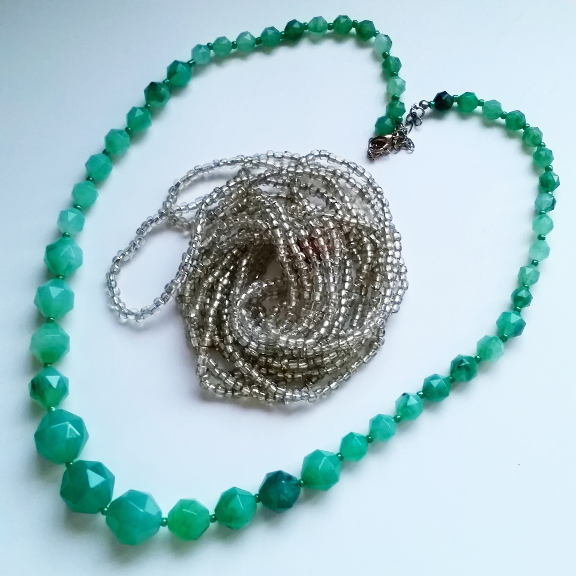 However, it’s quite common for beads to be glued in place on the string. You can tell instantly if this is the case because you’ll be able to see an even amount of string between each bead and if you tug on them they won’t budge. If the string in this case is damaged I would leave it in the shop as you will never be able to remove the beads. If you don’t want to spend a lot of time restringing, also watch out for strands of beads with knots between each bead as although you will be able to unstring them, you will have to cut out each individual bead and then tie knots in the new string if you want it to look the same. From a jewellery maker’s point of view, tying knots between beads is a great idea as if the string breaks it stops all the beads going everywhere – the only problem is how time consuming it can be!

Another thing to watch out for is beaded jewellery constructed with a metal chain, like the black necklace in the photo below. 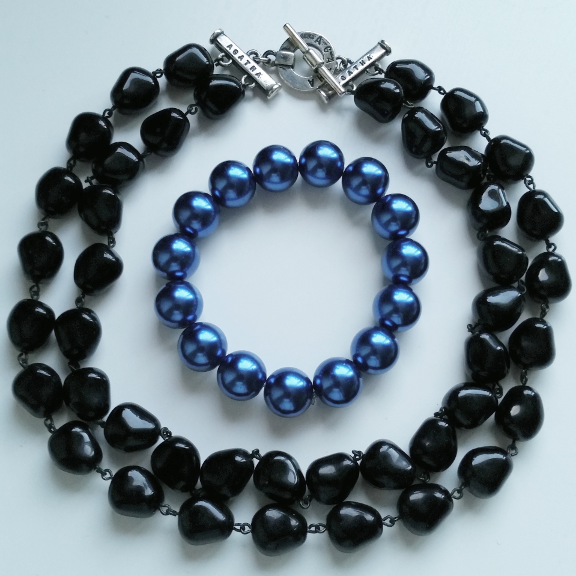 I’ve had this necklace for a few years, and it’s in very good condition. However, the metal links between each bead are only copper painted black, and eventually the black is going to wear off as the beads rub it and it’s not going to look as nice. If, when I’d picked it up in the charity shop, I had been able to see a lot of copper-coloured metal, I would probably have left it. Now I own it, when it goes orange I will probably remove all the beads with pliers and recycle them, but it’s unlikely I’ll take the time to recreate this necklace with the chain links. It would be much easier to remake it if it were on string. 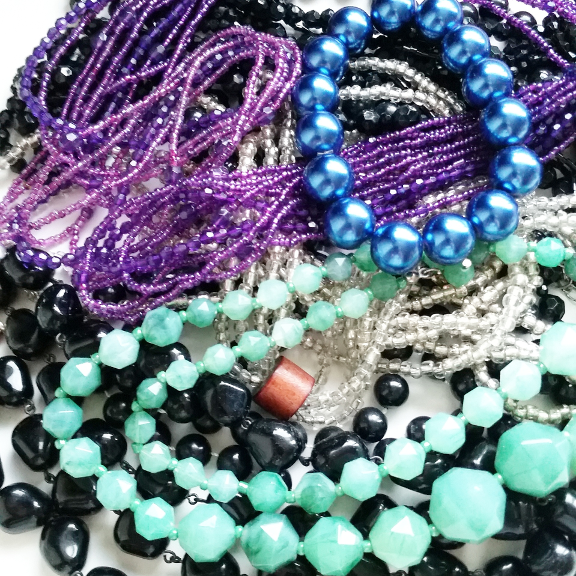 If you have any beaded jewellery that you don’t want any more, it is good to donate it as it usually stays in good condition, unlike a lot of metal-based pieces, which go orange. Charity shops do not want your  old orange copper jewellery, it will go straight in the bin!

I would love to know what jewellery you’ve bought from charity shops – leave me a comment or tweet me!