You are here: Home / Archives for goth 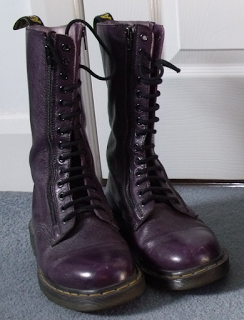 You can read the story of how I fell in love with boots and acquired these in my post this Dr Martens obsession, but I didn’t really talk much about how great I feel when I wear these. They’re the comfiest boots I own. I feel like they’re part of my body when I put them on, they’re so perfectly broken in.

Whether I wear them with jeggings or stripy trousers, a short dress or a long skirt, I feel like the queen of the world in these. Like nothing can really hurt my feelings, when I’m wearing such beautiful boots. Or, at least, that if it did, I could just look down at my feet, carry on walking, and feel better.

When I put them on I instantly feel more ‘me’ – more confident, more capable, more comfortable in my skin.

Now this is an old one. I bought this top in 2004 or 2005. I first saw it in H&M Bromley and being a kind-of-secret wannabe goth I loved it, but either they didn’t have any in my size or I chickened out of buying it, then returned later and there were none left. I can’t remember. 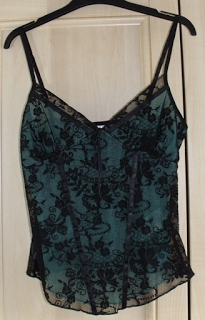 Anyway, I ended up going to H&M Croydon with my mum and my sister, and they didn’t have the top at all. I remember this day particularly well as I was feeling really sorry for myself, having spent the day at home off sick from school (I was in sixth form at the time). As I was wandering around the Whitgift Centre on my own whilst my sister tried on clothes and my mum waited for her, this guy with really long hair came up to me and announced he was going to cheer me up, and he pulled out a pop-up book and did funny voices in an attempt to make me smile.

I did end up laughing but being a self-conscious, easily embarrassed teenager I didn’t really appreciate his efforts while he was actually standing there, but after he was gone I felt really bad and have always regretted not saying a proper thank you. I even used to google appropriate word combinations in the hope that somebody knew who he was and that I could somehow send him a message to say thanks!

Anyway, a week or so later H&M Bromley must have restocked and my mum found the top in my size there. Not the longest period of searching I know but I don’t get obsessed with an item of clothing very often! The last thing I was obsessed by was a dress I saw in a charity shop which I didn’t buy then but went back and got a few days later.

I loved it but it is quite bad quality and when I lent it to my sister the elastic went in one of the straps so my mum had to sew ribbon to the backs of the straps to stop them unravelling. Because it looks pretty much like it should be underwear, to compensate I used to wear it with black jeans and later with an almost-knee-length floaty skirt. I say ‘used to wear’ as I haven’t worn it in quite a while! The ribbon on the front really needs replacing because it’s looking a bit worn, but mostly I just forget it’s there and the last time I wore it was probably when I was in second year of uni, which was the last period of time when I went clubbing regularly. Now whenever I go out clubbing it’s either for a special occasion and I have fancier things I can wear, or it wasn’t planned so I’m going in what I was wearing that day anyway!