When I was a teenager, I dreamed of being a Proper Goth. In actual fact I spent most of my time wearing jeans and a polo shirt – no exaggeration, I owned a bright blue polo shirt and a lime green polo shirt and the biggest dilemma of my weekend was deciding which of these awful items to wear first.

Every time I’d pass a goth on the street I’d try to sneak looks at them without making it obvious. For a while I had Matrix-style mirrored sunglasses, and that was great for this. Goths just looked so dramatic! I loved clothes that made a statement, that bordered on being a costume. I still do, I’ve just realised that it’s the drama I like, and the clothes don’t actually have to be black.

Anyway. I was way too shy to actually dress like a goth until sixth form, when, embolded by my sister, who was also going through a goth/rocker/emo phase, I finally started to buy some fancier clothes, thinking that I’d stopped growing. More fool me, I had a final growth spurt in Year 12, and outgrew those purple cords.

Of course, I didn’t have a job so I was trying to stretch my pocket money and birthday money to as many purchases as possible. I hadn’t yet discovered charity shopping (if only I had!) so this meant trawling the fast fashion shops and carefully examining every section with a ‘SALE’ sign above it. Mostly I repeat-wore my one pair of black jeans and a black button-down shirt with a vest top in blue or purple underneath. At least it was an improvement on those awful polo shirts.

And then one day, I fell in love with this top in H&M. It basically looked like underwear. Like a basque with no boning. Black lace and ribbon over a green mesh lining. They didn’t have it in my size at my local store, but I managed to track it down in Croydon – here’s the full story!

The quality was terrible. After one or two wears the elastic in the straps disintegrated, and my mum had to sew ribbon to the backs of them to hold them together. I was still really shy so I generally wore it under a black button-down shirt like the vest tops (WHY?). But oh, how I loved it. I even wore it occasionally as a student. Here is a photo of me, aged 20, wearing it at Studio Valbonne, a terrible but opulently decorated nightclub off Oxford Street. 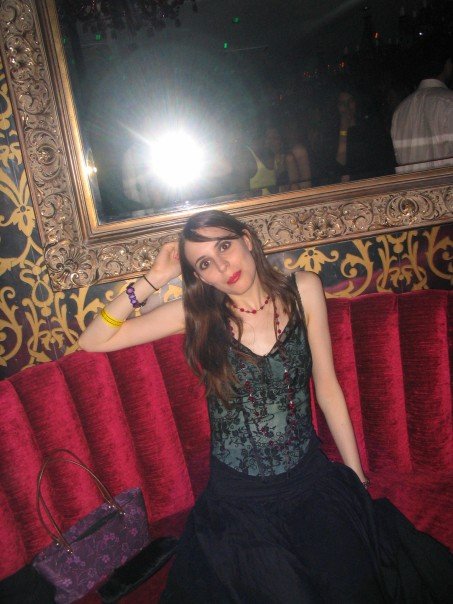 What is that pose. I wasn’t even drunk – this club was way too expensive to drink in. I drank tap water all night every time we went. Also, the skirt I was wearing looked crap with that top unless I tucked it into the top of my tights.

Alas this top, lovely and fun as it is, could not be described appropriate for everyday adult life. And thus it has languished, unworn, at the back of my wardrobe for many a year. And then a couple of years ago, the memories of that top and how cool it made me feel inspired me to buy this dress when I saw it in a charity shop. 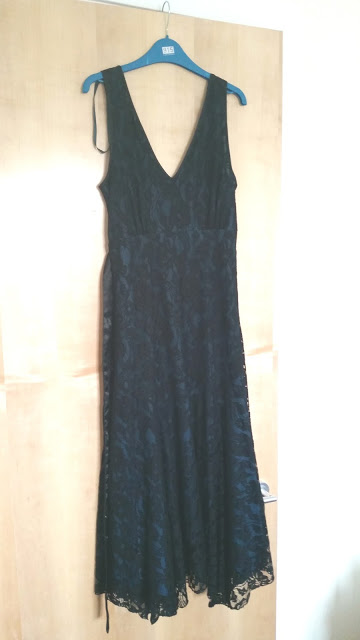 This dress is impossible to photograph well! I had to crank up the brightness and contrast and mess with the saturation. Hopefully you get the idea. It’s black. Over a teal lining – but unlike the top, it’s not slightly rough mesh, it’s soft, comfortable viscose. And although it’s got all the drama of the the top, it’s much more demure – falling to below my knee and rising quite high on my bust. I even wore it to work the other day. 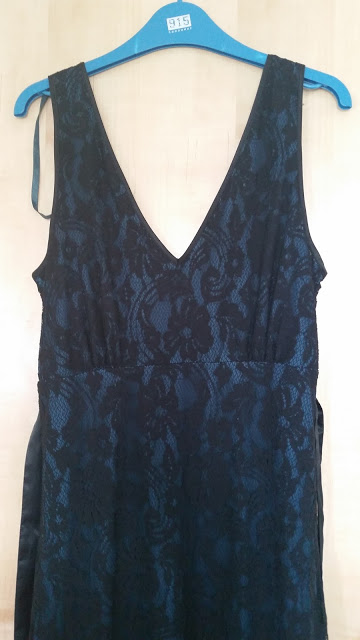 Do you have a particular aesthetic in mind when you look at clothes? Is there an item from the past that haunts you?